Welcome to Influenced, where we interview creators of all kinds about the gear they use to do their job — and their advice for folks looking to follow in their footsteps. This week, we talked to Steve Saylor, a content creator and accessibility advocate who’s helping make video games more enjoyable for all types of players.

Saylor is legally blind with a condition called nystagmus, which causes him to have extremely blurry vision. But that doesn’t stop him from enjoying and discussing games — not to mention helping make them better for other disabled gamers through his work as a consultant.

“I thought video games [were] going to be something I was never going to be able to play again, just because of how inaccessible they were,” says Saylor, recounting a time in his life when he sold all of his gaming equipment.

But thanks to recent strides in gaming and some smart use of technology, Saylor is able not only to enjoy top titles like Destiny 2 and Ghost of Tsushima, but to share his passion for them via high-quality YouTube videos and Twitch streams. Here’s a look into Saylor’s setup, which includes a mix of top streaming gear as well as a few gadgets that he finds especially useful when it comes to accessibility.

Gaming headsets are a great way to monitor your stream audio and get fully immersed in your favorite games, but not everyone wants a bulky set of cans on their head when they’re broadcasting for hours on end. That’s why Saylor often uses the Logitech G333 earbuds, which are far less conspicuous than the typical headset while still providing a reliable means of hearing game and chat audio.

“When I need to sort of not look like I’ve got large headphones on, I use these guys to talk,” says Saylor, who also uses the Logitech G Pro X headset (one of the better gaming headsets we’ve tested) when he’s off camera.

The Logitech G333 look more like a typical pair of earbuds than something made solely for gaming, with a handful of attractive color options that include black-and-blue and purple-and-yellow. It’s no surprise they’re Saylor’s go-to for unintrusive audio — these earbuds even come recommended for vigorous VR gaming on the Oculus Quest 2 headset.

If you watch a lot of Twitch or YouTube — Saylor’s channel included — you’ve almost certainly seen the Shure SM7B in action. This premium microphone is a staple in personal streaming setups and professional studios all over, providing broadcast-quality audio for videos, streams and podcasts.

“Coming from a radio background, I wanted to have at least a very good dynamic microphone that can sort of complement the voice that I have,” says Saylor. “So I knew that that was an investment a couple of years ago… and it’s been a workhorse ever since.”

The SM7B gets high marks around the web for its crisp audio, strong build quality and ability to to capture vocals with minimal background noise. We’ve tested its smaller sibling in the Shure MV7 while seeking out the best microphones, and while we consider it overkill for the average person, we did find it to offer some of the best audio quality of any microphone we’ve used.

Most people who own TCL’s 4-Series 50-inch TV probably use it in their living room to binge-watch from the couch. But for Saylor, it’s a super-sized computer monitor that sits about a foot and a half from his face when he’s gaming and creating content. When combined with the accessibility tools built into his PCs and consoles, this television allows him to enjoy his favorite titles and get work done despite being visually impaired.

“I use that because of my disability,” says Saylor. “With nystagmus essentially, being able to see specific details is very difficult, so the bigger the screen, the better for me.”

This very popular set features all of the requisites of a modern affordable smart TV, including 4K picture quality, plenty of HDMI inputs and a Roku interface that lets you fire up pretty much any streaming service you can think of. It also has various accessibility features including a text-to-speech mode that will narrate various menu items out loud as well as a system-wide closed captioning option. TCL’s more premium 6-Series is our pick for the best TV thanks to its overall quality for the price, and we’re heartened to know that TCL’s sets also hold up in an office setting where viewability is key.

Saylor has long been an Apple loyalist, partially because of the many accessibility features the company offers on its iPhones, iPads and Macs. His current handset is the iPhone 12 Pro, which lets him do things like magnify what’s on screen, have text read aloud and turn on a dark mode that makes things easier to navigate.

“What Apple has been doing with accessibility over the past several years and previous iOS updates… it just keeps getting better and better,” says Saylor. “In my home office, pretty much everything is Windows, but when I’m out and about and just kind of making content or just kind of in my everyday life, the iPhone 12 Pro is pretty much the main workhorse.”

Some of the iPhone’s key accessibility features include VoiceOver, which provides audible descriptions of what’s happening on screen, a Zoom feature that lets you enlarge text and image, and a Magnify tool that turns your phone into a magnifying glass to get a better look at objects around you. The iPhone also features various options for enlarging and bolding text for folks who have trouble seeing, and has a Dark Mode that Saylor finds especially useful.

“If you’re looking at a website that’s all white, it’s basically like having a giant flashlight in your eyes for eight hours a day,” says Saylor. “So dark mode has been my friend.”

We happen to consider the iPhone 12 the best smartphone you can buy for its performance, camera quality and overall design, and we love to hear that it’s also hitting the mark on the accessibility front for those who need the extra assistance. 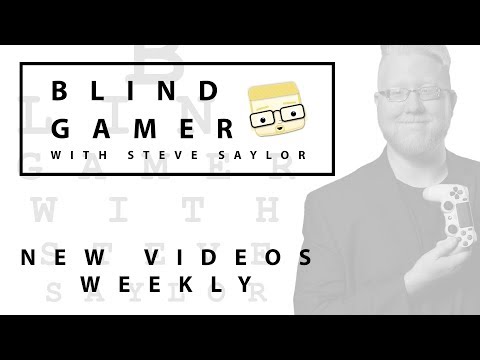 Like many creators we’ve spoken to, Saylor stresses that you don’t need to buy any expensive gear to start making YouTube videos or get your Twitch channel off the ground.

“Everyone has a phone nowadays and they all have a really, really good camera, especially some of the later models of phones, and you can start creating content just from that alone,” says Saylor. “Even the biggest tech YouTubers that are out there today with the latest gear, they all started with a webcam on a laptop.”

However, once you are ready to start investing in better equipment, Saylor strongly recommends starting with a good microphone.

“People can forgive bad video quality, but a lot of people have a really tough time being able to forgive poor audio quality because you can click off a video or stream real quick if your audio just sounds like crap,” says Saylor. “I would definitely invest in a decent microphone, even the cheaper sort of Blue Snowball mics for [less than] $100 that are USB. That already kind of gets you halfway to being able to create broadcast-quality content.”

Thanks for subscribing! Your welcome email is on its way.

Get the CNN Underscored newsletter in your inbox